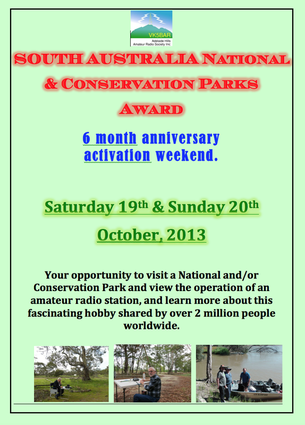 The VK5 National and Conservation Parks Award celebrated its 6 month birthday in October, 2013.  To celebrate the 6 month anniversary, a special activation weekend was held on Saturday the 19th of October, and Sunday the 20th October, 2013.

John VK5BJE had planned on activating 2 parks in the Adelaide Hills on Sunday.  However due to a severe fire warning, his plans were changed, and for the very first time, 3 metropolitan parks were activated.  This included the historic Fort Glanville Conservation Park (CP), which is one of the most complete examples of a 19th century artillery fort in Australia.  It was constructed in 1878 to defend Adelaide from a perceived invasion from Russia.  Steve VK5AIM, activated Ft Glanville CP later that same day.

Larry VK5LY and his dedicated wife Di, headed to the mid north of the state, and on Saturday, activated 3 parks near the historic mining town of Burra.  This was followed on Sunday by the Spring Gully CP in the wine growing region of the Clare Valley, and then Brookfield CP in the Riverland.

Ian VK5CZ also activated the Spring Gully CP in the Clare Valley on Sunday afternoon, while on Saturday, David VK5NQP, activated the Hale CP in the Adelaide Hills, which offers spectacular scenic views.

Paul and trusty wife Marija journeyed to the Yorke Peninsula, where 8 parks were activated, including the beautiful Innes National Park which has spectacular coastal landscapes, rugged cliffs and sandy beaches.  Ashley Walsh from ABC radio telephoned Paul on Saturday morning and conducted an interview about the Parks weekend and the hobby of amateur radio.

Meanwhile down in the south east, Col VK5HCF, Tim VK5AV, and Greg VK5ZGY with wife Gabi, activated the Gower CP, Telford Scrub CP, and Tantanoola Caves CP which features a spectacular cave set into a cliff face.  The cave is believed to have been exposed by the constant pounding of the ocean.  Over a period of time the sea retreated and this has left behind a cavern of shells, pebbles, and seal bones.

The weather over the duration of the weekend was hot, and the bush flies in the mid north and on the Yorke Peninsula were certainly out in force.  Sadly, the band conditions on 40m SSB during the weekend were quite poor.  However, a total of 214 contacts were made into VK2, VK3, and throughout VK5.  Park Activators managed a total of 38 Park to Park QSO’s.  This is where amateurs operating portable in a park, make contact with another amateur, operating portable in a different park.  Five contacts were also made with Summits on the Air (SOTA) activators in Victoria.

A collection of transceivers were used by activators, including the Yaesu FT-817nd, Elecraft KX3, Yaesu FT-707, Icom IC-703, and the new QRP rig on the market, the Wouxon X1M multiband qrp transceiver.  And a variety of antennas, including linked dipoles, an 88 foot doublet fed with 300 ohm tv ribbon, and a 40 metre PAR Half Wave End Fed configured as an inverted “V”.

Thanks to all the Hunters that called over the weekend.  Without Hunters, there would be no VK5 Parks program.