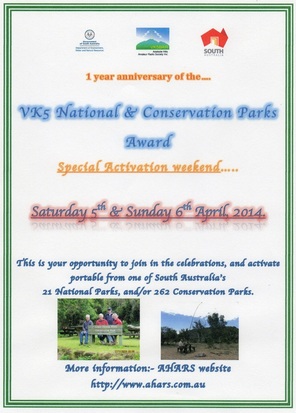 On Saturday the 5th and Sunday the 6th of April, 2014, a special activation weekend was held to celebrate the one year anniversary of the VK5 National and Conservation Parks Award.

During the weekend there were a total of 98 park activations by 29 dedicated activators.  Of these 98 park activations, 84 were from different parks, all over South Australia including the Yorke Peninsula, mid north, the south east, the Adelaide Hills, and the Riverland.

Over 2,300 QSOs were made over the 2 days by the activators, all around Australia and around the world.  There was also a total of 794 park to park contacts.

Special mention to Tony VK3VTH who travelled across the border and activated three parks in the south east of South Australia.  And also to Andy VK5AKH and Mark VK5QI who operated as VK5ARG, and activated a total of 20 parks on Sunday.  Quite an effort guys.

Thanks to everyone that participated, both activators and park hunters.  The weekend was a real success and very enjoyable.

WIA broadcast item re the results of the weekend

Video of the weekend